Blog
You are here: Home / Blog / News / 10 things you might not know about Roald Dahl… 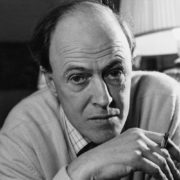 In preparation for our special family concert performance of Roald Dahl’s ‘Little Red Riding Hood’ on Sunday 18 June for the Crystal Palace Overground Festival, I thought I’d put together this little list of facts about Roald Dahl that you might not know!

Along with my trusty young ambassador Sarah Posner – and a little help from www.roalddahl.com! – we came up with this smashing list unveiling the fascinating man behind some of the world’s most loved children’s books.

At a first glance it would seem that Roald Dahl was just a big kid at heart, as this is prevalent throughout his writing. What also permeates his work is a perpetual sense of wonder, adventure, and at times peril, and this can only be drawn from his eventful and exciting life!

1. Roald Dahl was an RAF fighter pilot in World War II – he earned himself the nickname ‘Lofty’, due to his height (he was well over 6 ft, which was unusual for a pilot)

2. His lexical talents also extended to writing screenplays – such features include ‘Chitty Chitty Bang Bang’ and the James Bond classic, ‘You Only Live Twice’

3. He wrote all his children’s stories in a small hut in the bottom of his garden – everyone needs a space for their imagination to run wild!

5. Roald Dahl was a medical innovator – he contributed significantly to the invention of the modern ventricular catheter

6. He published a cookbook with his second wife Liccy (Felicity) – not limited to fictional tales, Dahl and his wife also put together a book of beloved recipes gathered across their years together

7. He invented more than 250 words and character names – Such treasures include scrumdiddlyumptious and frizzlecrump, and there is even an Oxford Roald Dahl Dictionary! Take that GCSE English!

8. Dahl often based his characters on people he knew himself – For example, the grandma in The Witches was based on his mother, Sofie. I’d hate to think who the Twits were based on…

9. The Roald Dahl Children’s Gallery was opened at the Buckinghamshire County Museum in 1996 – full of hands on experiences and activities, there is much to discover here

10. Roald Dahl was a spy! – During WWII he passed intelligence to MI6 from Washington

Many who are familiar with Dahl’s literary works will note his use of dark humour and regular plotlines of children overcoming great adversaries, often at the hands of adults. In his championing of youth, the power of imagination and creativity, his stories have endured for decades and will continue to delight parents and children alike for many generations to come.

LMP are delighted to be part of this legacy, through Paul Patterson’s musical account of Roald Dahl’s retelling of ‘Little Red Riding Hood’. Told with wit and the unpatronizing humour characteristic of its author, and the forces of a wind quintet (flute, oboe, clarinet, bassoon & horn), piano and narrator, this lively and tuneful rendition of the fairy tale classic will appeal to all the family.

You can buy tickets for LMP’s performance of Little Red Riding Hood via this link.

Anthem For Peace: Receives Match Funding from Mayor of London
Scroll to top