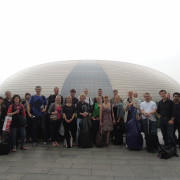 Against all odds the London Mozart Players are still fighting fit, says Ivan Hewett. May 28th 2014

This week the London Mozart Players will prove that they really are the comeback kids of the orchestral world. Twice in recent years this fine chamber orchestra has threatened to disappear. The first time was in 2011, when it lost its Arts Council grant. The second was earlier this year, when Croydon Council pulled the plug on its very generous annual grant, after 24 years of support.

But it’s still with us, and on May 28 the LMP will be giving a concert with star guest soloist Angela Hewitt in St John’s Smith Square, repeated the following day at Fairfield Halls in Croydon.

The LMP has managed to pull back from the brink by practising what in America comes as second nature: self-help, and calling on a little help from friends. The orchestra has become a self-governing entity, with the players themselves acting as the orchestra’s agent, manager and PR. A few months back Vernon Ellis, chairman of the British Council and patron of English National Opera, hosted a fund-raising concert for the orchestra at his house. That and some energetic proselytising by the players has raised just under £100,000. A number of eminent musicians associated with the orchestra have given their services for free, including pianist Howard Shelley, conductor Hilary Davan Wetton, violinist Tasmin Little, and the winner of the BBC Young Musician of the Year in 2012, cellist Laura van der Heijden. These two concerts this week are a way of saying we’re still here and we mean business.

I’m glad they’re still here, because for me and many other classical music lovers the LMP is part of this country’s musical furniture. The orchestra was founded in 1949, which makes it the oldest chamber orchestra in Britain, and was led right up to the early 1980s by its founder Harry Blech. I saw him as a student in the latter part of his reign, and remember thinking he seemed as old as the hills. He strode stiffly up to the podium and conducted with a no-nonsense sturdy technique, as if he was kneading dough.

Since then Jane Glover, Matthias Bamert and Andrew Parrott have all taken on the role of MD. I remember the Bamert years especially well, as the orchestra’s programming was particularly lively, with a steady flow of commissioned works. Since 2010 the gifted South African-born conductor Gerard Korsten, whom the players clearly warm to, has taken the lead.

So what next? There are several steps the Players are taking to survive in the medium term, such as reviving their connection with Croydon’s Fairfield Halls. This has the best acoustics in Greater London, and the orchestra has a history of residency there stretching back 24 years. The orchestra also has a long-standing relationship with Portsmouth Grammar School, which has involved commissiong a string of new works, and also burgeoned outwards into the local community. There are plans to transplant the fruits of this back into the orchestra’s original Croydon base.

This combination of artistic enterprise with grass-roots involvement gives a model of how the orchestra might prosper in the long term. Bringing this off won’t be easy. Like the Academy of St Martin-in-the-Fields, the LMP has had some of its shine taken off by the rise of “period” bands such as the Orchestra of the Age of Enlightenment. At the other end of the historical spectrum are those groups which have pulled the chamber orchestra into the modern era, such as the Britten Sinfonia and the Scottish Ensemble.

The signs are that the LMP is learning a few tricks from these upstarts. There are plans to build relationships with starry musicians to act as soloists and directors for particular projects, as the Britten Sinfonia does so cleverly. There’s also a sense among these younger orchestras that rooting what they do in a particular place and time is the key to success, as much as artistic quality. For example, rather than just commissioning a composer to write a piece, you link it to something specific about the moment. The LMP has tried this already with its Portsmouth commissions, where each year the new piece has been linked to the theme of Remembrance Day (a particularly emotive topic in a naval city).

This shows the LMP is serious about reinventing itself. On the other hand, there is the accumulated loyalty and affection, among both audiences and musicians, for what the LMP has always been. And of course there’s the inherited treasure of the orchestra’s core repertoire. Mozart and Haydn’s symphonies and concertos will always be great music, and there will always be an appetite for them.

The difficulty is that these different aspects of the orchestra’s identity pull in different directions. The trick over the coming months and years will be to manage that tension, so that past and present knit together in a way that makes sense. It’s a more than worthy enterprise, and we should wish them well with it.

Support the orchestra and promote a concert
Scroll to top