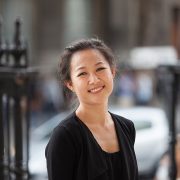 Chinese-born violinist Sijie (Susie) Chen moved to the UK when she was five years old. During her studies in the UK, USA and Germany she became a string finalist in the BBC Young Musician of the Year Competition, and also discovered a love for historical performance. She now enjoys a varied career performing on modern and period violins.