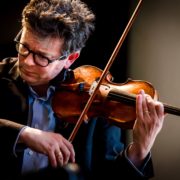 Martin Smith was an Exhibitioner at the Royal College of Music Junior Department and a scholarship winner at the Royal Academy of Music, where he studied violin with Lionel Bentley and Manoug Parikian. He subsequently studied further with Nicholas Roth and the renowned Russian virtuoso Grigori Zhislin. For some years he was a member of the Duke String Quartet, with whom he appeared throughout Britain and Europe, and he has also appeared with the Allegri and Bridge Quartets. He currently performs with the Ellerdale Piano Trio, which he founded in 1992, and with the Primavera Ensemble.

Martin first played with the LMP in 1988, and joined the orchestra a year later. From the outset he has been involved with the orchestra’s educational and outreach work, and particularly relishes coaching young string players. As a result he has been a key player (no pun intended) in the LMP’s many Side-By-Side projects. Away from the LMP Martin has worked with most of the UK’s leading chamber orchestras, such as the Academy of St Martin-in-the-Fields and the English Chamber Orchestra. He also leads New London Sinfonia and Orchestra Nova, and has appeared as guest leader of the City of Birmingham Symphony Orchestra, Guildford Philharmonic Orchestra, Brunel Ensemble and London Concertante. He has made solo appearances around the UK and also in France, Germany, Holland and the United States, many as leader of the London Soloists Chamber Orchestra, which he led and directed for over ten years.

Martin is also active as a conductor. He has appeared with the London Mozart Players, and has led orchestral workshops for them and for ESTA. He has been conductor and artistic director of Enfield Chamber Orchestra since 2008, and of the Richmond Orchestra since 2016, and has also worked with various other orchestras in the south of England.

Martin’s hobbies include Roman roads, the outdoors in general, and the avoidance of housework. He lives in St. Albans with his solicitor wife Margaret, and hopes one day to understand his daughters.