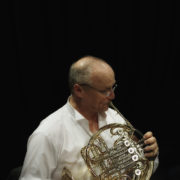 Peter Francomb began playing the horn at the age of ten.  His early studies were in Eastbourne with Jane Allen, and in London with Ifor James and Ron Harris. Early performing experience was gained with the Brighton Youth Orchestra. In 1974, he won a scholarship to the Royal College of Music, where he studied with Douglas Moore. In 1976 at the International Festival of Youth Orchestras, he won the Van Cliburn Foundation Scholarship, which funded a further year’s tuition with David Cripps and Tony Halstead at the Guildhall School of Music. On leaving college, he worked as guest principal horn with the BBC Symphony Orchestra, the Academy of St. Martin in the Fields, the Chamber Orchestra of Europe and The Royal Philharmonic Orchestra.  In the field of chamber music, he has worked with the Nash and Prometheus Ensembles and since 1985 has been a member of the Albion Ensemble.

In 1988 he was invited to become the principal horn of Royal Northern Sinfonia and in 2018 he will celebrate 30 years as principal horn. During his time in Newcastle/Gateshead, he has played a large part of the horn solo repertoire. In 1992 he was invited to perform Giovanni Punto’s 5th horn concerto at the International Horn Convention in Manchester, and he subsequently recorded this and three other concertos for Pan Classics with Royal Northern Sinfonia. In 2016, Peter was invited to become principal horn of the London Mozart Players and he now combines these duties with Royal Northern Sinfonia. In Spring 2016, Peter performed Mozart’s 2nd horn concerto with LMP at St. John’s Smith Square. This April, Peter performed Strauss 1st horn concerto with Thomas Zehetmair conducting, at Sage Gateshead, repeated at Keswick in October. Peter continues to be invited as guest principal with the Academy of St. Martin in the Fields, The Philharmonia, The RSNO, The Scottish Chamber Orchestra, The Chamber Orchestra of Europe, BBC Scottish Symphony Orchestra, BBC National Orchestra of Wales, Royal Liverpool Philharmonic, City of Birmingham Symphony Orchestra, and Opera North.