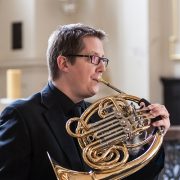 Martin was born in Stourbridge in the West Midlands. He read Music at the University of York where he studied the horn with Bob Ashworth, and later at the Royal College of Music in London with Julian Baker Whilst there he was awarded the Sir Arthur Somervell and Manns Prize for brass playing.

He spent the following years building a varied freelance playing career working with a wide variety of ensembles such as the BBC Symphony and Concert Orchestras, Royal Northern Sinfonia, English National Ballet, and Royal Ballet Sinfonia. He first worked with the London Mozart Players in 2006 and continued to play with them regularly before being appointed sub-principal horn in 2014. He also guests with other chamber orchestras such as Britten Sinfonia and City of London Sinfonia, and regularly plays principal horn with Brandenburg Sinfonia.

Martin is a firm believer in the importance of music in education and is a keen and committed teacher, holding teaching positions at Trinity School Croydon, Winchester College, Croydon Music & Arts, and Sydenham School amongst others. He also coaches the horn and brass sections for the Croydon Youth Orchestra and Croydon Youth Winds.

When not playing or teaching, Martin enjoys spending time with his family, and tinkering with cars and mostly breaking bits of them.