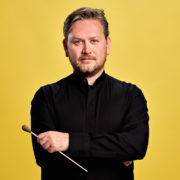 JONATHAN BLOXHAM ANNOUNCED AS OUR CONDUCTOR IN RESIDENCE AND ARTISTIC ADVISOR

Today, we have announced Jonathan Bloxham as our Conductor in Residence and Artistic Advisor. Jonathan will be working closely with our artistic team to develop our vision for the years ahead, as well as conducting key LMP concerts including those at Fairfield Halls, where our orchestra is Resident.

“It’s an honour to be joining LMP’s musical family at this exciting time in their long and distinguished history. We’ve already had many exhilarating moments on stage and I’m really looking forward to working more closely with all the orchestra to build vivid and diverse programmes together.”

“It’s wonderful that we’re able to formalise our close relationship with Jonathan, especially during the 2023/24 year when Croydon is London’s Borough of Culture. This is a very exciting time for the orchestra and I am confident that Jonathan’s expertise and vision will help us to unlock our full artistic potential”

Jonathan has a long-standing relationship with LMP, making his debut with the orchestra in November 2019 at Kings Place with a programme of Mozart, Schubert and a new commission. Since then, he has continued to have a vivid presence in our orchestra’s life. Projects have included Beethoven and Mendelssohn symphonies, Shostakovich’s Cello Concerto No.2 with Sheku Kanneh-Mason, Glazunov with Jess Gillam and Tchaikovsky with our Young-Artist-In-Residence, Leia Zhu.

LMP is directed by Leaders Ruth Rogers and Simon Blendis.

Ruth commented on Jonathan’s ability to ‘understand the soul of a chamber orchestra’ and is eager for Jonathan to help the orchestra ‘tread the tightrope of planning programmes by balancing innovative and imaginative initiatives with the need to keep faithful LMP audiences happy.’ Similarly, Simon is excited by Jonathan’s versatility and looks forward to many ‘electrifying concerts’ in the coming years.

Jonathan’s next appearance with us will be in February 2023 for Building Blochs and Birkenstocks at Fairfield Halls. We will be joined by Sheku Kanneh-Mason performing Bloch’s Schelomo and Jonathan will conduct the orchestra through Mendelssohn’s Symphony No.4. Fitting with our commitment to always including an ‘added extra’ to our own promotion concerts, Sheku and Jonathan will engage in a conversational exploration of the music during the concert, shedding new light on the performance

Full details of our season can be found on here.

Don’t let our name mislead you – we don’t just play in London, and we certainly don’t just play Mozart! As well as our residencies at Fairfield Halls in Croydon, St John the Evangelist in Upper Norwood, and Opus Theatre in Hastings, we’re well known internationally for working with many of the world’s greatest conductors and soloists. We’re proud to have developed a reputation for making and playing adventurous, ambitious and accessible music, and for being at the forefront of embedding arts and culture into the life of local communities across the UK and beyond.

After celebrating our 70th birthday in 2019, we soon found ourselves navigating orchestra life during the pandemic. During that time, we created an award-winning digital concert series which reached millions of people – reaffirming our commitment to our audiences.

We’ll be opening the launch event for Croydon’s Borough of Culture in 2023, as well as continuing to host our own concerts and events throughout the next year.

Since taking up conducting in his mid-20’s, Jonathan Bloxham has swiftly made his mark as a conductor of “accomplished technique, innate musicianship, with a natural rapport with orchestras and a deep knowledge and understanding of the symphonic repertoire” (Paavo Järvi).

Highlights of 22/23 include invitations back to Salzburg, Munich, Residentie Orkest and Royal Liverpool Philharmonic, and the start of his tenure with the London Mozart Players, including concerts at Fairfield Halls, Croydon (London).

Jonathan has a natural affinity with opera and made his Glyndebourne Festival debut in 2021 (Luisa Miller) and returned to Glyndebourne Touring Opera (Don Pasquale), receiving 5-star reviews. In September 2022 he joined the Luzern Symphony to conduct a production of Bartok’s Bluebeard’s Castle at the Luzerner Theater in association with the Luzern Festival.

He has recorded CDs with the London Symphony Orchestra (2022) and Nordwestdeutsche Philharmonie (2021, Strauss and Cesar Franck): “irresistible” – Musicweb International.

Artistic Director of the Northern Chords Festival, he has commissioned young composers such as Vlad Maistorovici, Jack Sheen and Freya Waley Cohen. Jonathan studied conducting with Sian Edwards, Michael Seal, Nicolas Pasquet and Paavo Järvi, after having learnt the cello at the Menuhin School and at Guildhall.  A former cellist, he made his concerto debut at the Berlin Philharmonie in 2012.