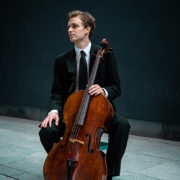 We’re very excited to welcome Leo Popplewell to LMP as Cello No2. Leo studied at Clare College, Cambridge, and later at the Guildhall School of Music and Drama.

He has performed as a soloist and chamber musician in many of the world’s leading concert halls, including Carnegie Hall, Wigmore Hall and Barbican Hall, and appears regularly at festivals across the UK.

In 2017 he formed the Mithras Piano Trio, taking first prize at the 10th Trondheim International Chamber Music Competition and 67th Royal Over-Seas League Competition. They were selected as BBC Radio 3 New Generation Artists for the 2021-23 seasons, and are alumni of the Kirckman Concert Society.

His studies have been generously supported by the Countess of Munster Musical Trust, Help Musicians UK, and the Craxton Memorial Trust.

Sign up
Our new partnership with Naxos for Education