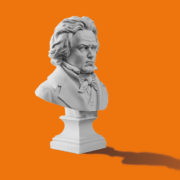 1. A tale of two procrastinators

You may know the story about Mozart’s Don Giovanni (1787). He procrastinated the overture and ended up staying up late the night before, kept awake by his wife pouring him drinks. The ink was still wet when the musicians received the scores the next day. However, such was his genius that the audience had nothing but praise: ‘Everybody, on the stage and in the orchestra, strained every nerve to thank Mozart by rewarding him with a good performance’.

Sadly, when Beethoven procrastinated on his Violin Concerto (1806), the result was not so well received. The soloist, Franz Clement, had to sight-read passages and possibly gave up with the piece altogether, choosing instead to improvise. People left the concert feeling confused at best, ‘exhausted’ at worst.

2. All press is good press?

One reviewer of the Violin Concerto asks that Beethoven stop writing music consisting of ‘unconnected and piled-up ideas’. Instead, he should ‘give us works like his first Symphonies in C and D […] which will assure him of a permanent place among the foremost composers’.

It’s easy now to laugh at this unenlightened journalist. The earliest symphonies are wonderful, but they don’t occupy our public imagination the way Beethoven’s Third, Fifth and Ninth Symphonies do. But at the time, the view that Beethoven’s music was too long, strange and complicated was not uncommon. The Violin Concerto, which was very long and very difficult, alienated the same people who had objected to the Third Symphony ‘Eroica’ – and there were plenty.

The Violin Concerto didn’t sink into utter obscurity, but it was rarely performed in the four decades following its lukewarm debut. When it was performed, reviewers usually talked about how talented the soloist was to pull off such an attempt, rather than praising the concerto itself.

Positive, even glowing reviews did come along, but they were rare. For example, in 1828, the year after Beethoven’s death, the Violin Concerto was performed in Paris. One deeply moved reviewer called the concerto ‘one of the most beautiful musical conceptions one can imagine’. Another wrote slightly grudgingly: ‘the piece, we must say, was full of charm and grace’.

Beethoven avoided visiting London all his life. However, it was there that the Violin Concerto finally got its due. In 1844, a twelve-year-old Joseph Joachim played the violin as Mendelssohn conducted this concerto in Hanover Square. It was a genuinely monumental performance. It made both Joachim and the Violin Concerto famous, and Joachim would regularly play the piece for the rest of his career.

Other violinists such as Henri Vieuxtemps, Carl Flesch and Eugène Ysaÿe had their own distinctive interpretations of the Violin Concerto. By the end of the nineteenth century, the Concerto’s musical standing was indisputable. It’s worth noting that it was ultimately made famous not by critics, or even its composer, but by musicians.

Of course, there were still detractors: in 1855, a critic watched Joachim perform the concerto, then told him afterwards: “This is all very nice, but now I’d like to hear you play a real violin piece.”

Nowadays, both Beethoven and his Violin Concerto are canonical, and safe from such criticisms. General opinion is that it redefined the relationship between soloist and orchestra, and stood at the intersection between the Classical and Romantic eras. Beethoven’s is usually considered the first of the five great nineteenth-century violin concertos, although trying to pin these down is like the world’s nichest musical chairs: other contenders include Brahms, Bruch, Lalo (for the cognoscenti), Mendelssohn, Saint-Saëns, Sibelius and Tchaikovsky.

Well, there’s nothing like a live performance to help you decide! We’re playing Beethoven’s Violin Concerto on 12 January 2023 at 7.30pm at Queen Elizabeth Hall, Southbank Centre. Our Artist-in-Residence, Leia Zhu, is our soloist for this piece.

A Fresh Take on Beethoven
Scroll to top