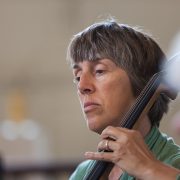 Sarah studied cello with Stefan Popov at the Guildhall School of Music and chamber music with Hans Keller and the Chilingirian String Quartet. She also took part in masterclasses with William Pleeth at the Aldeburgh Summer School. She has played in many orchestras and ensembles in the UK including the BBC Symphony orchestra, The Guildhall String Ensemble, the Orchestra of the Age of Enlightenment, Peter Gabriel’s New Blood Orchestra, English Touring Opera, Garsington Opera and Glyndebourne Touring Opera Orchestra for whom she has played principal cello.

She has made recordings for the Cello Classics label, Music for Two Cellos and ‘Petits Fours’, music for four cellos with the London Mozart Players cello section. Also on the Cello Classics label she has performed in a CD of music by the great pedagogue Julius Klengel. As a baroque cellist and founder of Bach Camerata she has also recorded St John Passion (in English) with The Crouch End Festival Chorus and David Temple.

Sarah is a keen chamber musician and has played with the Mistry String Quartet and was a member of the Mainardi Trio. For 10 years she was Artistic Director of The Chamber Players who play regularly at Festivals and venues throughout the UK, including Holywell Music Rooms, Imperial College and Buxton and Chichester Festivals with artists such as Ashley Wass, Gaby Lester, Tim Horton and Benjamin Nabarro.

Sarah is a keen participant in education and community projects and plays principal cello in the Chipping Campden Festival Academy Orchestra, sitting side-by-side with music college students for a series of concerts in the Chipping Campden Festival. Other recent projects include devising a piece for the Croydonites Festival with SLiDE in South Norwood and workshops and concerts for Everyone Matters in Bromley and Kingston.

Sarah also edits audiobooks for the Naxos AudioBooks label and has been involved in many exciting projects including The History of Classical Music and Famous Composers in collaboration with ClassicFM. She has performed on several of these discs including The Cellist of Sarajevo and Macbeth with music by oscar-winning composer Stephen Warbeck.

She has been a member of the London Mozart Players since 1998.