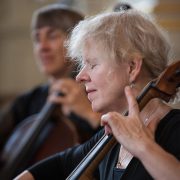 At sixteen Julia Desbruslais won an open scholarship to study the cello with Florence Hooton at the Royal Academy of Music.  During this time she won many awards including the Suggia Award and the Leverhulme Chamber Music Scholarship.  Under the direction of Sydney Griller she was a founder member of the all-female Fairfield String Quartet. They enjoyed ten years touring Britain and Europe, winning major competitions, giving many live broadcasts for the BBC, and recording for Hyperion.

On leaving the Quartet, she became Co-Principal Cello with the London Mozart Players, where she regularly performs with the Chamber Ensemble and has appeared as a concerto soloist. She is also Principal Cello with the London Jupiter Orchestra, with whom she has performed John Taverner’s Eternal Memory at St John’s, Smith Square. She regularly plays as guest principal with many London orchestras, including the New London Orchestra and City of London Sinfonia.

She has a great passion for inspiring young children and is one of the leading lights in the vast education programme of the LMP. Her work has included performing to all ages from work with young children to the elderly in numerous and varied venues.  Her work with young children led to the production of television workshops and compositional projects and she was responsible for the setting up of cello master classes and massed cello ensembles with young children. Julia holds posts as a cello teacher at Whitgift School and Eltham College, and a large private class. With her husband Michael Posner, they run the highly successful Summer Strings residential music courses for children of all ages.

She is a member of the cello quartet formed from the four cellists of the LMP, presenting concerts drawing on the works of the great cellist composers. Their first CD Petits Fours was received with great acclaim. Recent recordings include ‘Lullaby for a Lost Soul’ by Ronald Corp.