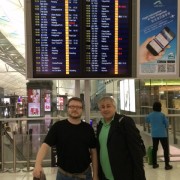 Following a short rehearsal in London we all got on a coach and arrived at Heathrow 4 hours early.

Lots of time for shopping, eating and drink. Flight left on time.

Smooth 12 hour flight and landed bang on time but in a severe storm. We weren’t allowed to disembark because of the danger of lightning strike on the gangway!

The onward flight was then delayed due to bad weather and we landed at Wuhan about 9pm. There was an air conditioned limousine waiting – not of us but – for Gerard who whisked away into the night. We got onto one of 2 coaches (not sure why as there are only 27 of us) for the interesting hour long journey to the hotel. The 2 drivers raced each other through the busy streets both determined to get us to the hotel first but risking none of us arriving at all! En route some interesting sights of young girls dressed up in short skirts, high heals and lip stick but on what looked like a hair dryer purporting to be a motorbike with no lights and not wearing crash helmets!

We finally arrived at our luxurious hotel, about 11pm, after nearly 24 hours travelling. Then, after finding our rooms on the 23rd floor, it was off to eat, back for a drink, catch up on emails and bed.

I woke at 5am. 1st problem to sort. The British council had emailed to say they were delighted to inform me that they had invited 20 people to use the 20 complimentary tickets I had promised for our Shanghai concert. The problem was that a) we had actually been allocated only 8 tickets and b) I had already promised 4 of them to someone else. Great. So it’s looking like my day off will be busy sorting that little problem. However, another email was a request from Kristina Rihanoff (strictly come dancing) to quote for providing musicians for an event in September.

Another email. The British council want to bring 14 people to the Beijing concert.

Enough for now. Back to sleep.

Our ‘free day’ to recover.  News that Beijing has ‘sold out’ (2000 tickets).  Amazing breakfast in the hotel. Noodles, Dim Sum etc etc. Then Paul, Scott and I took a taxi into town. We thought that last night’s coach was scary but this was something else. No seat belts, no signals, mains roads shared by lorries, cars, push bikes, pedestrians and chickens. Very smoggy and raining. Not hugely interesting.  Back to hotel. Practise and then a managing group meeting at 6.30pm

Now just heard that Shanghai only have 8 seats unsold and Wuhan is also a sell out. Everyone loves the LMP out here. Are there any Chinese people who might like to come to Croydon next Thursday 29th?

David Wilson and Gerard went to the hall and met with Sa Chen – the soloist. In the evening the management group went to the most astonishing restaurant. Not one person spoke a word of English and I’m not sure they had EVER had a westerner in their restaurant.  But they had wifi! We linked to “google translate” and typed in “spicy chicken” “spicy pork”  “spicy noodles” and out popped the Chinese translation. The waiters had never seen anything like it and ran to the kitchen shouting Instructions.

A word of warning. DON’T use the word spicy unless  you like mountains of red and green fresh chillies. First concert tonight. Amazing audience. The soloist had to do 2 encores and we did the whole of the last movement of the Jupiter symphony as our encore. Stats for audience. 90% under 30 years old! Everyone played brilliantly. I did a speech at the beginning of the concert with a translator by my side. After the concert back to hotel and a drink and now bed. It’s 12.21am and the coach leaves for the airport at 6.50am. That’s the schedule every day now. 6.30am coach, flight, rehearsal, concert, hotel by 11pm the coach at 6.30am! Travel via plane to Shanghai. Very hot and humid. Short walk to concert hall. Apparently Putin had been there the day before. We found a restaurant in the Lonely planet but didn’t choose the Bullfrog! I had invited representatives from the British Council back to the hotel bar after the concert. I left the concert hall in a hurry to ensure I arrived at the hotel before they did only to find the bar full of “ladies of the night”. I quickly rang the BC and changed the venue. Phew! Travel to Shanghai station and bullet train for 5 hours to Beijing. 298kmh. Paul and I thought we’d managed a cheeky upgrade for £9.70 only to find that was only an upgrade for one stop! So we had to sneak back to our original seats. Check into hotel and we had 20 mins before coach to concert hall. Astonishing hall. Completely sold out. Met representatives and guests of British Council then back to hotel, drink and bed. 5.45am onto the coach to the airport. 3 hour flight to Guangzhou (it’s as far as London to Moscow).

Check into hotel and 3 hours before rehearsal. Had a noodles in a local tiny restaurant Followed by a sleep. Then to the hall. It’s VERY hot and sticky here. Wonderful hall and loads of children in the audience. The audience were totally thrilled and afterwards about 30 of them wanted photos taken with me and Scott. Then back to the hotel where Gerard bought everyone drinks. Our Chinese soloist Chen Sa joined us. We ate and drank until 1.30am. Then emails to sort until 2.30am and sleep. Up at 6am.

Incredibly unhelpful coach driver refused to put the luggage on the bus so David Wilson got inside the underneath of the coach and did it himself. Then the driver had to reverse his coach out of the car park onto a busy road then drove erratically to the airport.

We have now checked in and having coffee before 16 hours flying back to London!