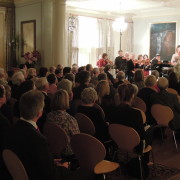 A hundred or so people were privileged to attend the most delightful gala concert on Tuesday 29 May.  The concert was genially hosted by Sir Vernon Ellis. Sir Vernon is an eminent businessman, chair of the British Council, and famous for his enduring support to music, especially opera, as recognised by his knighthood.  The venue was one of the many stars of the evening; as out host explained, the venue was once a hotel, so the size of the reception area and its resemblance to the salons in which the music of Mozart and many others was originally performed was entirely explicable and appropriate.  Such is Sir Vernon’s love of music that he considers himself self-indulgent rather than generous to host as many as 90 concerts each year.

On what was an unusually warm evening, many guests arrived having survived the inconvenience of the tube strike, to be welcomed in a way which made the cares of the day swiftly dissolve. The LMP indulged their guests in a multi-faceted feast from start to finish.  Even before the main course of music, the guests enjoyed a champagne reception, with canapés and other hors d’oeuvres most of which were prepared by the multi-talented Julia Desbruslais, served generously and charmingly by members of the orchestra and at least one of their offspring.  The reception provided an ample opportunity for mingling with friends old and new.

The concert was wonderful in so many ways.  The programme was beautifully constructed and performed.  Our ears adjusted to the rather intimate acoustic of this venue to the sound of the Magic Flute overture, conducted by Hilary Davan Wetton.  Then we had another glimpse of the prodigious talent of Laura van der Heijden (BBC Young Musician of the Year 2012) performing the Tchaikovsky Rococo Variations with such apparent ease and finesse as if she’d been doing so far longer than her 17 years.  Tasmin Little followed, backed by the string section, in “Winter” from Vivaldi’s Four Seasons.  Such was the intimacy of the occasion that Tasmin took the time before playing to introduce the composer’s markings to the score, which gave some of us, at least, a new perspective on a familiar piece.

Howard Shelley has a great knack of putting the great music he plays into context, as those who manage to attend the pre-concert talks/interviews that are such a feature of LMP concerts well know.  He led the orchestra through two movements of Mozart’s sublime concerto no 21, having explained how this was written in an extraordinarily productive period.

Those who assembled this programme might well have asked themselves “How do you follow that?”  With a nod to Monty Python, perhaps they said “and now for something not completely different”.  Somebody of undoubted genius (£10, please, Peter) but too young to have heard them live (that’s £20, please) claimed to recall the work of the incomparable Michael Flanders and Donald Swann, and in particular their song to the tune of Mozart’s horn concerto.   With great ingenuity (£30) he approached a trumpet student and successful author, Cynthia Harrod-Eagles and commissioned her to produce an updated version, around the theme of the LMP’s parlous financial circumstances.  Such was his persuasiveness (£40), that Cynthia accepted the commission and delivered a masterpiece.

With Messrs Flanders and Swann sadly no longer available, there was simply no choice but to plead, cajole or blackmail Sir Richard Stilgoe to perform the world premiere of this hilarious and linguistically demanding work.  Whatever the measures taken to arrange his cooperation, they worked and the outcome was a masterwork, both in conception and delivery.

Viv Davies, the managing director of the “new” LMP took the opportunity to thank all concerned for their generous contributions to the evening, including Sir Vernon and Lady Ellis, the performers (all of whom had waived their fee) and the audience.  Viv played particular tribute quite rightly to the members of the working group of musicians who are working tirelessly and almost sleeplessly on the various activities necessary to secure and enhance the future of the LMP.  Representing that group, Paul Archibald, Julia Desbruslais and Peter Wright then introduced the main themes of these projects

As if that wasn’t enough, we were all further indulged with a delicious buffet supper, again served by the indefatigable LMP players, but who then had more time to mingle.  It was a real privilege to be able to chat freely with the performers, and the evening came to an end all too soon.