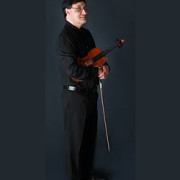 David Angel studied at the Yehudi Menuhin School with Frederick Grinke and Jaqueline Salomons, and had many masterclasses with Lord Menuhin.

In 1971 he won an Associated Board Scholarship to study at the Royal Academy of Music with Frederick Grinke. He had regular chamber music coaching with Sidney Griller and won prizes for both solo and chamber music.

He has played quartets professionally since 1976; for eleven years with the Bochmann Quartet and since 1988, with the Maggini Quartet, which he co founded in that year. With the Quartet he has performed and broadcast widely as well as recording some thirty discs and working with composers such as James McMillan, Eleanor Alberga, Roxanna Panufnik, and extensively with Sir Peter Maxwell Davies.

With pianist David Elwin he has enjoyed a long standing duo: in September 2007 they made their maiden tour of Japan.

When his quartet schedule allows, he co-leads the 2nd violins of the London Mozart Players, a job he has held since 1995.

A day at Surrey Hills Festival – May 3rd
Scroll to top