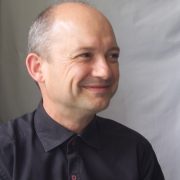 ANDREW ROBERTS studied in London with Carl Pini and in New York with Joyce Robbins. Whilst a student, he was principal 2nd violin of the Britten-Pears Orchestra and the European Community Youth Orchestra.

In 1981 he was a founder member of the Chamber Orchestra of Europe, travelling all over the world and working with conductors such as Claudio Abbado and Nikolaus Harnoncourt. Subsequently, he joined the Auriol String Quartet which studied with Milan Skampa (of the Smetana Quartet), Andras Mihaly (a pupil of Kodaly) and members of the Amadeus Quartet. The Quartet was resident at Aldeburgh in 1989 and gave recitals at the Wigmore Hall, Queen’s Hall Edinburgh, Snape Maltings Concert Hall and throughout the UK and Europe.

Other CD recordings include the ‘Piano Quintet’ by Georges Enescu (the Solomon Ensemble/Naxos 8.557159), music by Silvina Milstein (Lontano, to be released on Lontano records) and the ‘String Quartets no.1 and 2’ by Buxton Orr (with the Beethoven String Trio of London on Toccata Classics/ TOCC0103)

Recent work includes live BBC Radio 3 broadcasts of chamber music from St Georges, Bristol and for the opening of King’s Place, London; concerts at the Finchcocks Keyboard Collection, Kent and the inaugural concert of the Elgar Concert Hall at the University of Birmingham.

In 2013, he formed a Duo partnership with the pianist Rachel Fryer, to explore the rich repertoire for violin and piano.