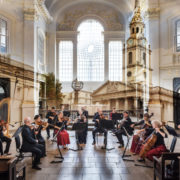 We are delighted to be part of ‘Fresh Horizons’, an exciting new weekly online concert series filmed in the iconic church of St Martin-in-the-Fields in Trafalgar Square. The series of fourteen performances runs from January to April 2021 and alongside the London Mozart Players the series will feature other internationally-acclaimed artists including Chineke!, Stile Antico, Peter Donohoe, The Gesualdo Six, and the Academy of St Martin in the Fields.

LMP performs in the first concert in the series, ‘Four World Seasons’ which goes live on 28 January at 7.30pm. It’s a lively programme featuring works by composers who took inspiration from Vivaldi’s famous ‘Four Seasons’ and made the theme their own. Astor Piazzolla takes us to Buenos Aires, while Roxanna Panufnik takes us on a mini world tour. It’s the perfect concert with which to start the new year.

Tickets for each concert are available for £10 (or buy a Season Pass) and films will be streamed from the St Martin’s website and available for 30 days.

For more information and to book tickets, visit the St Martin-in-the-fields website

Beat the lockdown blues with LMP’s ‘Classical for Kids’ page.
Scroll to top