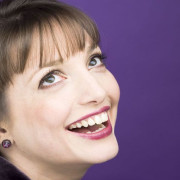 The LMP’s newly appointed Associate Composer, Roxanna Panufnik, introduces us to her most recent work, Four World Seasons which received its world premiere run over the weekend of 2/3 March, conducted by LMP Music Director Gerard Korsten.  Four World Seasons, performed at The Anvil, Basingstoke on 2 March, before being performed again at Fairfield Halls, Croydon on 3 March, formed part of the Cultural Olympiad’s Music Nation weekend.  It featured acclaimed violinist Tasmin Little, with whom Panufnik has a long-standing creative partnership.

Panufnik writes “In early 2008, the violinist Tasmin Little rang me to ask whether I’d write a series of short pieces for her, accompanied by chamber orchestra. Considering a world where global concern for climate change and seismic shifts in international political landscapes affect us all, we decided to take Antonio Vivaldi’s much-loved 1725 Four Seasons and give the concept a 21st-century twist, creating an entirely new work with each season (lasting approximately 5 minutes) influenced by a country that has become culturally associated with it.”  Spring in Japan, an Indian Summer, Autumn in Albania and a Tibetan Winter form the music in this celebration of music across the world, reflecting the many cultures descending on London for the 2012 Games.