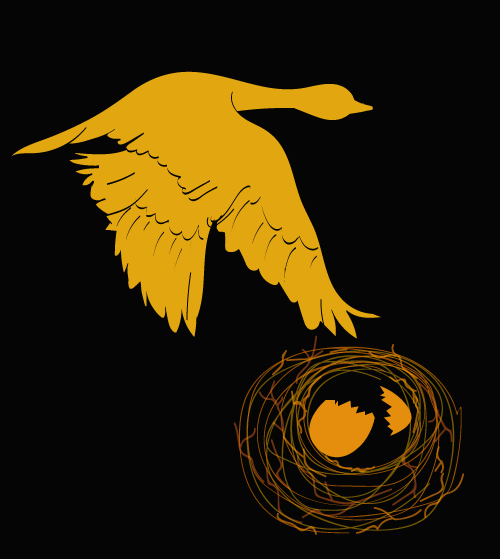 On Thursday 14th April 2016, the London Mozart Players will be performing the British premiere of Stephen Oliver’s completion of Mozart’s unfinished opera The Goose of Cairo (L’Oca del Cairo).

Having only been performed twice before in its original form, in the run up to this performance of the opera we will be mapping out the journey of the Goose – From the hatching of Mozart’s story in 1783, to Stephen Oliver’s version taking flight over two centuries later, in 1990. Now Mozart’s story has been told (see part 1 & 2 here), we move onto Stephen Oliver’s completion of the opera.

Like Mozart, Stephen Oliver (1950-1992) was already a vastly experienced opera composer by the time he was confronted with the dilemma of L’oca del Cairo, with around forty operas to his credit by the time he was forty. This was to be the fifth and final time Stephen would produce something for Adam Pollock’s visionary Musica nel Chiostro festival, held in the enchanting countryside of South Tuscany.

It was 1991 and the Mozart bicentenary was inspiring impresarios around the world. Pollock set Stephen a challenge: to complete the unfinished Goose, not by adding pastiche Mozart or arranging other music by the great man to fit – both of these had been done before – but by setting his own music alongside Mozart’s, refreshing and illuminating the original. To make the challenge still harder, no new texts were to be set to the existing arias – Varesco’s original words should still be there.

The fact that Mozart had only set music to Act 1 of Varesco’s original plot was also a problem that needed solving, to say nothing of the complexity of that plot. Having a first act by Mozart and a second by Stephen Oliver would not do. Stephen quickly realised he would need to create a new plot around the existing numbers in such a way that their texts still made perfect sense. His notes to Mozart’s numbers show him working out what dramatic situations needed to have arisen before the arias could be inserted effectively (see fig 1). 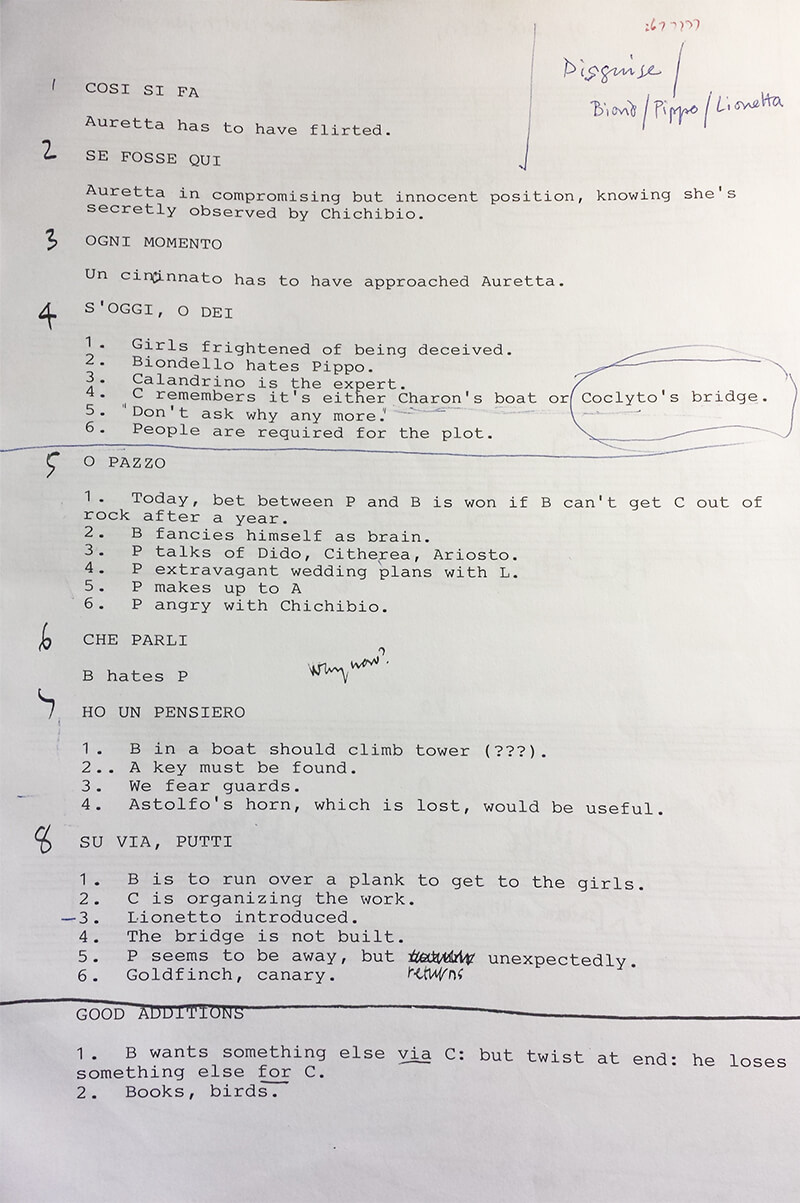 Some of Mozart’s music was complete in almost every detail, but a lot was not; in many cases there is a sketch of the instrumentation at the opening of the piece, followed simply by the vocal line and the bass line, and an occasional insertion of an instrument at a given point to be fleshed out later. In the case of Biondello’s aria Che parli, che dica, there was less even than that. All that Mozart had scribbled down was most of the tenor line and some fragments of a clarinet obbligato; Stephen had to supply all the rest (see fig 2, 3 & 4  for comparison).

After an original plot draft involving a mad ornithologist was rejected by Pollock, Stephen came up with a scenario with a good deal of English-style farce in it. There are young lovers, an old and foolish guardian and a good deal of attempted hoodwinking and horseplay. The Goose only makes an appearance at the very last minute, in a dénouement in which for the one and only time Stephen actually interrupted Mozart’s music with some of his own.

So what happens? Come and find out!

To follow the story of The Goose of Cairo as it unfolds over the coming weeks and to keep up to date with all the latest news on the performance, visit our dedicated webpage. 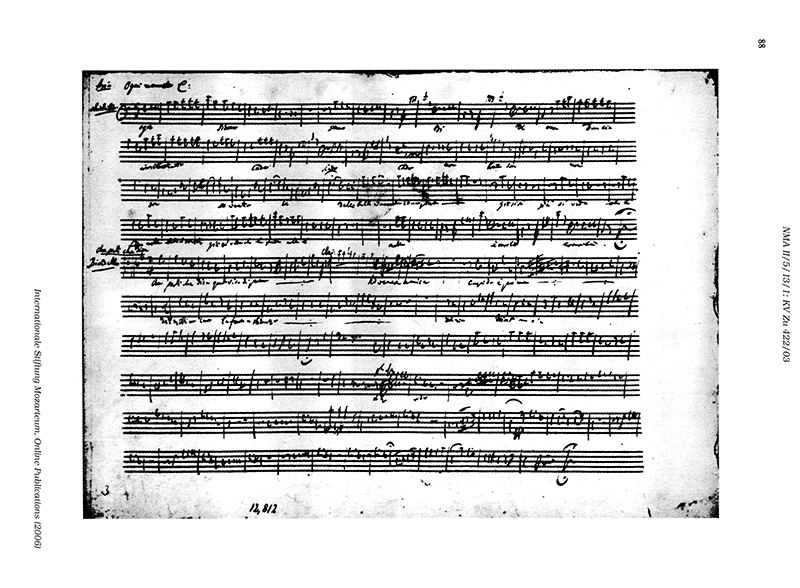 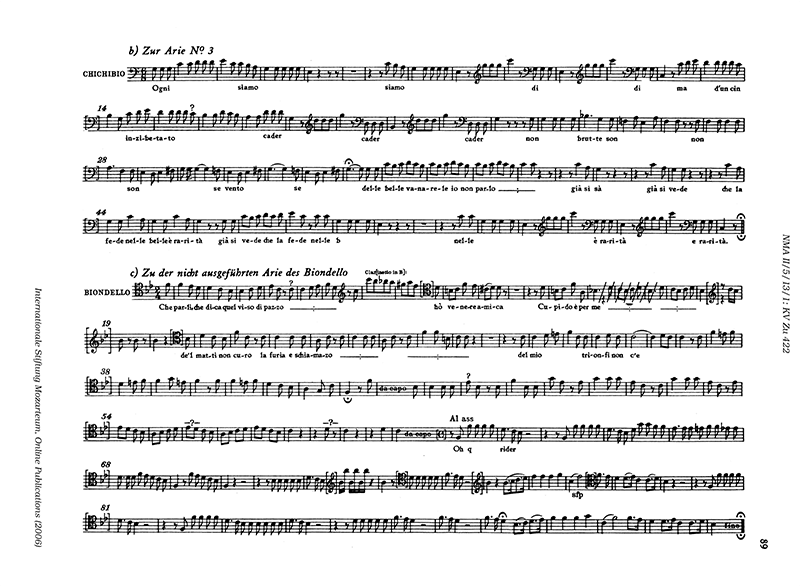 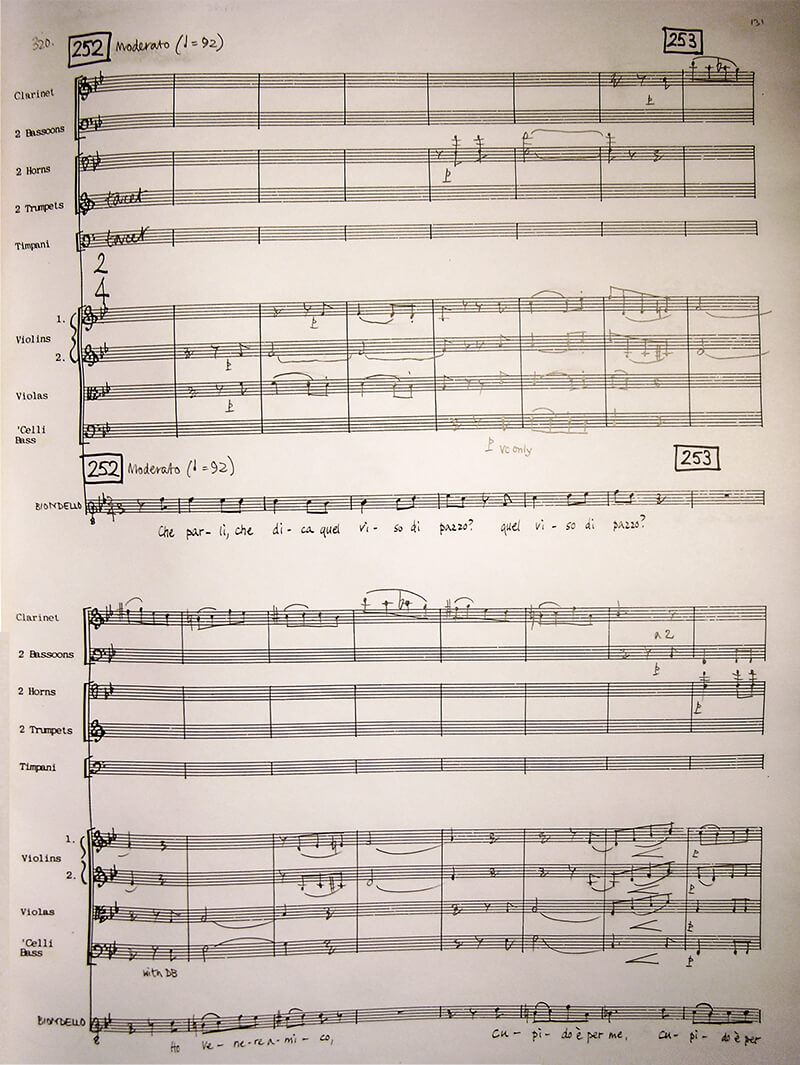 Buy tickets
The Making of the Golden Goose