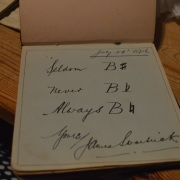 I happened upon some WW1 postcards when I was researching my family heritage. Building your family tree is extremely addictive I warn you, but it also gave a certain amount of inspiration to the ‘Hidden Croydon’ project. ‘History is made by individuals’ is an opinion thrown around often by historians, and I think on the whole they mean ‘great’ individuals; Kings and Queens, political leaders and human rights activists. This is great for school curriculum and for the study of the objective, but I don’t think we consider the subjective nature of history enough. The personal implications of world events. The effect of ‘great’ individual decisions on the ‘small’ individuals. It is focused on greatly in today’s news reports, but slowly through the ages we may lose perception of the human emotions felt at the time, whether they be anger or joy, confusion or certainty, fear or hope. However, I do not think that this is the case for the First World War. The events that led up to and followed the 4th August 1914 have been well documented not only by historians, but also depicted by many war poets and writers, classical composers and artists. A very human reaction; honest, brutal and unforgiving. But behind these writings, music and images, which are often at the risk of being glamorised, was a very real experience and can be expressed most effectively by the ‘small’ individual.

This is where ‘Hidden Croydon’ came in. When I found my Great Grandfather’s postcards, it was like holding a piece of history in my hands, and he and other ‘small’ individuals had been given a voice. Unfortunately the embroidered ones appear to have been stuck into a scrap book, so the writing on the back is illegible, apart from a long line of kisses on the bottom of one. However, on the one that reads ‘Till we meet again’, we can read written in pen by my Great Grandmother, Elizabeth Davies;

“I think of you today dear though we are far apart,
I send my loving wishes, to greet my true sweetheart.
From Lizzie.”

And then a reply in pencil from David Davies:

“From a hungry husband sending this out of the trenches to you. From Dai to Lizzie” All my Great Grandfathers fought in the trenches and all of them returned home, a fact for which I’m extremely grateful for, as my grandparents were born post-1918. But I’m also grateful to my grandmother for recognising the significance of this world event in the context of the Davies family, preserving these postcards for future generations to truly appreciate the personal cost of the war.

I don’t think there are many who escaped school without at least touching upon the catastrophic loss of the First World War. I also don’t think there are many people alive today whose family weren’t affected in some way. Whether their ancestors worked on the land, in munitions factories, down the mines, volunteered as medics or played any part in the war effort, this all goes to paint a raw picture of that moment in time, made up of personal voices and faces of the significant unknown and ‘small’ individuals of that generation. This is what the ‘Hidden Croydon’ project is all about. 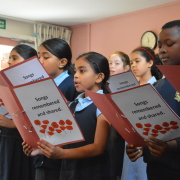 As part of a wide-reaching WW1 commemoration project, the London Mozart Players, Croydon’s resident orchestra, have been facilitating the visits of newly established primary school choirs to Croydon senior’s homes As well as preparing Jonathan Dove’s new commission For an Unknown Soldier, the children of Atwood Primary Academy, Croydon Parish Church Juniors, Ecclesbourne Primary Academy and Monks Orchard Primary, have also been learning old wartime songs, and creating their own variations of them to sing to residents of local care homes. Repertoire includes Wish Me Luck, It’s a long way to Tipperary and other familiar tunes.

The ‘Coffee Concerts’ which have come to be known as WW1 Songs Remembered and Shared, are an important part of the project for several reasons. They are providing an important performance opportunity for the schools in the lead up to the main concert on the 14th November, and they are also encouraging the children to engage creatively with a bygone era. 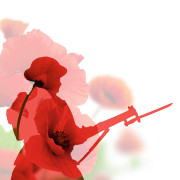 The London Mozart Players and The Portsmouth Grammar School will present the World Première performances of a major new co-commission from Jonathan Dove on 9 November 2014 in Portsmouth Cathedral and 14 November in Fairfield Halls Croydon. For an Unknown Soldier is a setting for tenor solo, children’s choir, adult chorus and chamber orchestra of nine poems about the First World War. Opening with a setting of Wilfred Owen’s portentous ‘1914’, the work offers a moving meditation on the tragedy of war with poems by Mary Gabrielle Collins, Helen Dircks and Ivor Gurney among others.

The LMP is delighted to continue what has become an annual collaboration with Portsmouth Grammar School, which has in recent years seen the commissioning of important new work from composers such as Roxanna Panufnik and Sir Peter Maxwell Davies.

James Priory, Headmaster of Portsmouth Grammar School comments:
“We are thrilled to be giving young musicians from Portsmouth and Croydon the opportunity to work with a living composer and to be involved in creating a major new musical work inspired by Remembrance. I cannot think of a better way for young people to engage creatively in the centenary of the Great War.”

Viv Davies, Managing Director of the London Mozart Players comments:
“We are really excited to be collaborating with the Portsmouth Grammar School and Jonathan Dove on such a significant and important project. The preparation for the events in November has brought together diverse individuals and groups in a unified and common purpose. We have no doubt that the première performances of the cantata will be profound and moving occasions that will express, in a wonderfully creative way, the essence, spirit and deep significance of remembrance. We are looking forward to it immensely.” 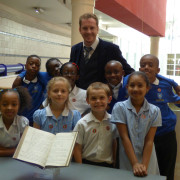 LOOKING BACK: Children from Ecclebourne Primary School and music teacher Tim Sporerer with a log book from when pupils were evacuated from the school’s former buildings to make way for a war hospital. The book is on display at Croydon Museum”

Details of the Concert 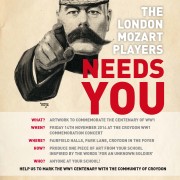 As part of our commemorative concert on 14th November at Fairfield Halls, we are inviting schools across the borough to produce one piece of artwork inspired by the words ‘For an Unknown Soldier’ to enter an art competition. The three best pieces of work as judged by independent judges will be displayed at The Croydon Clocktower, Katherine Street. 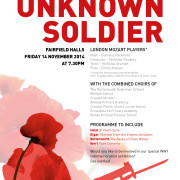 This event is expected to sell out. Tickets from £12.

The London Mozart Players are proud to announce their special concert at Fairfield Halls to mark the centenary of WW1 on Friday 14th November at 7.30pm.

This concert is the culmination of a far-reaching community project funded jointly by the Arts Council of Great Britain, Croydon Council and Portsmouth Grammar School.

The project has touched the community of Croydon on many levels with the formation of four junior school choirs performing alongside Whitgift School, Croydon Minster and Portsmouth Grammar School choirs in the London premiere of For an Unknown Solider written by the renowned composer Jonathan Dove.

Riddlesdown Collegiate will curate a WW1 commemoration exhibition to be displayed in the foyer on 14th November created from their trip to the First World War, Stories of Croydon exhibition at the Museum of Croydon, memorabilia collected from the residents of Croydon and their written responses to these artefacts.

All schools in Croydon have been invited to produce artwork to mark WW1 that will be displayed that evening in the Fairfield Halls.

We will be joined in the concert by young instrumentalists from Croydon Music and Arts who will play side by side with the LMP. Flautist Emma Halnan, the Croydon Festival winner 2013, will also perform a concerto with us.

We invite you all to join us with the community of Croydon to mark the WW1 Centenary.