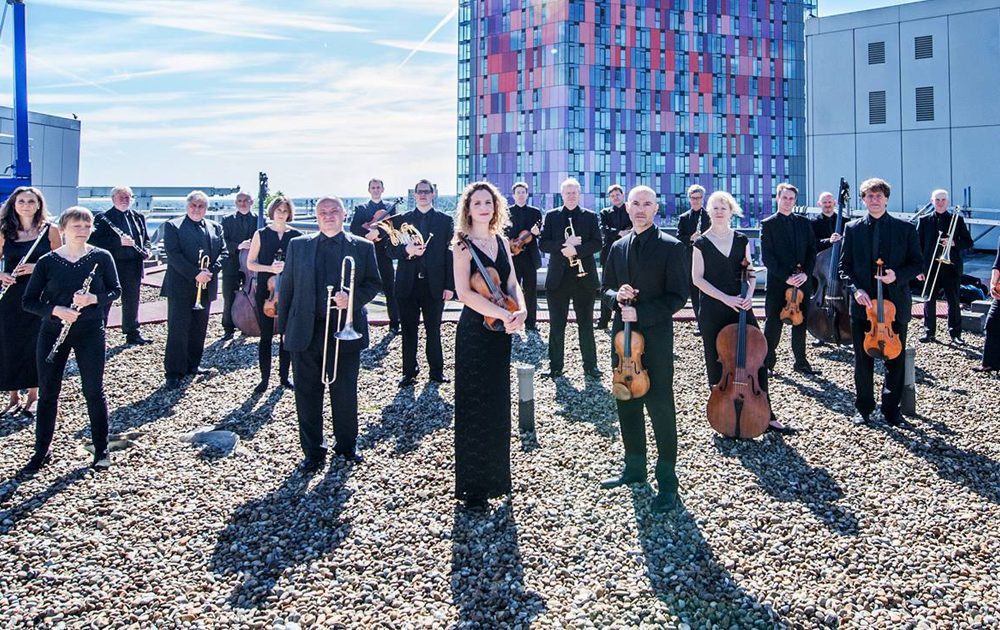 On Saturday 9th March, LMP performed an all-Mozart programme at the University of Plymouth with pianist and Music Director of The Arts Institute, Dr Robert Taub. The programme featured three greatly contrasting works: the rarely-performed, humorous Seranata Notturna; the brooding and dramatic Piano Concerto in D minor, and the triumphant Jupiter, Mozart’s last symphony. Philip Buttall from Seen & Heard International reviewed the performance and his article can be found below:

This was the inaugural concert of the new Musica Viva Concert Series, with the remit to bring internationally acclaimed performers back to Plymouth, in the UK’s far South West. Its stated aim is to ‘inspire, educate, challenge, and unite’ audiences by presenting world-class musicians in a number of different situations: public performances, open rehearsals and informal talks.

At the heart of this initiative is the University of Plymouth, and specifically its Arts Institute. For a number of years this functioned under the banner of Peninsula Arts. Its then Director of Music Simon Ible delighted audiences in the city and its environs with regular musical events. Those often featured the Ten Tors Orchestra, and, more recently, the Peninsula Arts Sinfonietta, ensembles which comprise virtually the best available players in the area, all of whom earn their living through music – unlike Plymouth’s own eighty-strong Symphony Orchestra, one of the oldest strictly amateur ensembles in the country. They have all played their part in bringing symphonic repertoire to the area.

When Ible relinquished the baton some year ago, The Arts Institute (still Peninsula Arts) were extremely fortunate in encouraging eminent American-born concert pianist, academic and festival organiser Robert Taub to take up the position. Ible had already organised a number of themed concert series, but his approach and that of Taub’s would reflect their different musical expertise and interests. I had a chat with Taub towards the end of 2018 about his new Musica Viva Series. He wanted to make the point that there should be nothing unusual about the London Mozart Players (LMP) – an ensemble of world repute, whom he had chosen to open the series – coming to Plymouth. The audiences here have not always turned out in their hundreds, but Taub was confident that people should flock to see a first-class product. He also wanted to reach out and involve the audience; one of the ideas was a short pre-concert talk.

Judging by how the church was packed full well before the advertised start-time, Taub could certainly tick two of his boxes already: employ a top ensemble to bring in the punters, and then give everyone present a chance to find out a little more about the works to be heard. Taub had enlisted the help both of LMP Principal Cellist Sebastian Comberti, and a Model D Steinway Grand (hired by the Arts Institute direct from Steinway & Sons, London in another instance of ‘only the best will do’).

This first-time pre-concert talk fell a little flat in actual presentation. A single hand-held microphone just could not accommodate both speakers, especially when Taub moved to demonstrate something at the piano. (Hands-free radio microphones might be a way to go.) The talk highlighted some interesting points to be picked up in the programme, essentially to do with the piano concerto, and given in a most congenial and by no means overly technical fashion…… read more

Carnival of the Animals concert SOLD OUT

Showcasing the genius of Mozart, Haydn & Hummel
Scroll to top