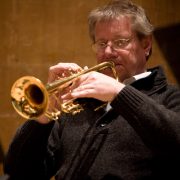 Peter started playing the Cornet in his local brass band – Woburn Sands – at the age of 8. He went on to study at the Royal College of Music where his teacher was David Mason – who played the famous piccolo trumpet solo on the Beatles ‘Penny Lane’. Peter has been a member of the London Mozart Players for 33 years and was appointed by the orchestra’s founder – Harry Blech. Highlights during this period with the LMP include a TV series with Jane Glover during the 80’s, a tour of Germany during the celebrations of the fall of the Berlin Wall and the Royal wedding of Prince Edward. Peter is now also a Director of The London Mozart Players.

He was also a member of the Royal Shakespeare from 1983-2004 playing in 100’s of productions, on and off stage, in a multitude of interesting costumes! He travelled to Los Angeles with the RSC and performed as part of the 1984 Olympic Arts Festival.

Peter has spent most of his career as a freelance trumpet player working with all the London Orchestras and recording for films and TV. He was heard for many years, every evening, on the titles of the BBC news. Peter also performed with the Philharmonia Orchestra during the World tour of ‘The Three Tenors’.

He was the original trumpet player in Les Miserables & has performed in many other West End shows including Phantom of the Opera, Evita, and more recently the National Theatre’s War Horse.  In his spare time, he enjoys motor racing, cooking and skiing.