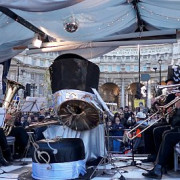 The LMP combined with a Dubstep DJ at the New Years Day Parade.

A quintet of brass players from Croydon’s London Mozart Players and DJ Toby Harrison joined forces to produce some Dubzart, a mix of Mozart and dubstep. The New Years Day parade, now in its 27th year, was televised across the continents to more than 500 TV stations. Croydon’s entry, named Connecting Cultures, aimed to celebrate the diversity of the town. More than 500,000 spectators packed the 2.2mile route through the West End of London. More..