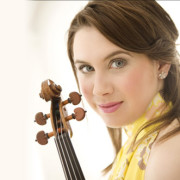 Fairfield Halls, Croydon celebrates its rich fifty-year history in 2012, celebrating its status as an internationally renowned venue at the forefront of the Borough’s cultural activity with a concert by the LMP on 2 November 2012.

The London Mozart Players lead the 50th celebrations under the excellent musicianship of its Associate Conductor Hilary Davan Wetton.  2 November 2012 marks exactly 50 years to the day since the first ever concert played at Fairfield, featuring Yehudi Menuhin, conducted by Sir Malcolm Sargeant, and attended by HM The Queen Mother who opened the building.  Included are works by early 20th century Croydon composer dubbed ‘The African Mahler’ – Samuel Coleridge-Taylor, Malcolm Arnold’s Fairfield Overture, music by Walton and Parry, and a new fanfare by LMP’s Associate Composer Roxanna Panufnik.  Stepping into the shoes of Menuhin after exactly fifty years is the supernaturally talented Surrey-born violinist Chloë Hanslip, whom Menuhin discovered aged five, subsequently offering her a place at his school.  She performs the Bruch violin concerto.

Opened in 1962, Fairfield Halls has gone on to create significant musical history, playing host to acts ranging from The Beatles, David Bowie and The Rolling Stones to its unique classical music programme – highlights include performances by Vladimir Ashkenazy, Croydon-born Jacqueline du Pré, who performed with the LMP in 1962, alongside international touring orchestras and soloists including Dame Janet Baker.  Fairfield Halls was built ten years after the Royal Festival Hall, based in detail on the design.  It is said that the unrivalled, exquisite acoustic at Fairfield was what the RFH had aimed to create, but didn’t quite achieve!