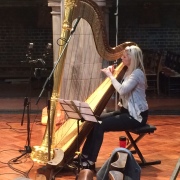 On Oct 22nd the LMP recorded a new album with Claire “The Girl With The Golden Harp”. The album is due to be released on March 1st. Please let us know if you would like to pre order a copy

Jones was born in Crymych, Pembrokeshire, and began playing the harp at the age of 10; she performed for the Queen and Duke of Edinburgh when she was 16. In 2007, she was one of the inaugural winners of The Prince of Wales’s Advanced Study in Music Award, and was appointed as the prince’s official Harpist for a 3-year term. During the previous year, she had won the harp solo at the National Eisteddfod of Wales, been a finalist at the Third International Harp Contest in France, and won the Royal College of Music Harp Competition.