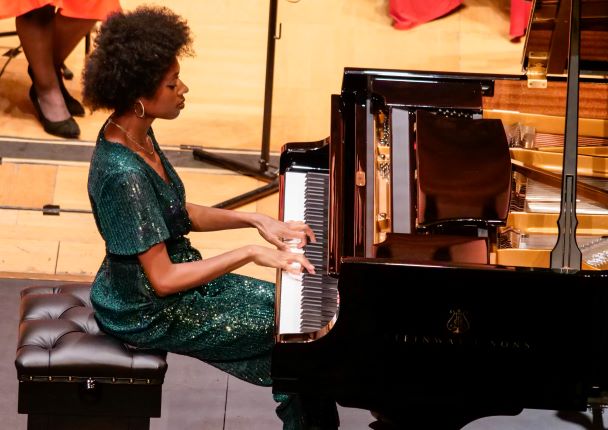 The concerts opens with Prokofiev’s effervescent ‘Classical’ Symphony, which cleverly juxtaposes 20th-century style with the traditional four-movement symphony – with some added parody and humour. But the spotlight is on our soloist Isata Kanneh-Mason, who performs Clara Schumann’s Piano Concerto, which Schumann composed at the tender age of 14. A BBC Young Musician finalist, four-time winner of the Royal Academy Iris Dyer Piano Prize (among many other prizes) and multi-scholarship winner, Isata is much in demand in concert halls around the UK and abroad. Isata recently recorded Schumann’s Piano Concerto in her much-celebrated debut album Romance. Rossini’s Overture to L’italiana in Algheri sets the scene for the second part of the concert, which centres on Mendelssohn’s jaunty and optimistic Italian Symphony.

‘She is a pianist who makes lines sing beautifully and virtuosic passages dance, finding intimacy and eloquence at telling moments…’ – BBC Music Magazine.