You are here: Home / Blog / Galleries 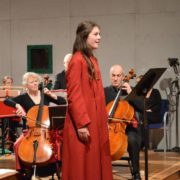 The London Mozart Players are inviting young trebles, both male and female from the borough of Croydon to audition to perform Howard Blake’s ‘Walking in the Air’ and the opening unaccompanied verse of ‘Once in Royal David’s City’. The winning treble will perform in the LMP’s Christmas concert at St John’s Upper Norwood on 15th December.

All applicants will be auditioned by a panel from the LMP and Adrian Adams, Director of Music at St John’s Upper Norwood. These will take place at St John the Evangelist, Sylvan Road during the week of 27th November. Applicants should prepare ‘Walking in the Air’ from the Snowman and the first verse of ‘Once in Royal David’s City’. Piano accompaniment will be available.

If you require a copy of either ‘Walking in the Air’ or ‘Once in Royal David’s City’ please contact the Operations Manager, martin@lmp.org

Deadline for application is Wednesday 22nd November 2017 and audition times will be confirmed by Friday 24th November. Please contact Jenny Brady jenny@lmp.org or 020 8686 1996 for any enquiries. 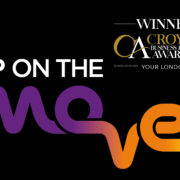 We’re thrilled and delighted to have been awarded the Cultural Impact Award at Croydon Business Excellence Awards for our ‘LMP on the Move’ series. This new award, sponsored by the Rise Gallery, reflects our commitment to widen audiences for classical music – particularly among young people and non-traditional classical audiences. Through the LMP on the Move series we have been able to develop new partnerships and discover new venues for classical music in Croydon and this has enabled us to reinvigorate awareness of the LMP within Croydon (while the Fairfield Halls undergoes a facelift) and attract an audience that really reflects all the borough’s communities.

We have been on an amazing journey, met and played with some fantastic young musicians and even surprised ourselves with the diversity of venues, audience and music. This award really is the icing on the cake. Huge thanks to our partners and collaborators and of course to our supporters and audiences! 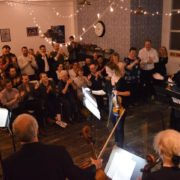 The launch night of #LMPOnTheMove at Matthews Yard once again embodied this vision of taking the power of classical music into the community to uplift, inspire and engage new audiences. The main space of Matthews Yard had been cleared to accommodate a chamber version of the orchestra, and the audience paid just £8.00 each to reserve a seat, receive a free beer and/or give a donation. This was classical music set right in the middle of Friday night in Croydon, with the hum of conversation and the deep fat fryer of BRGR&Beer hissing away in the background. As the shadows of their bows flickered across the stripped-back walls in a dynamic dance of musical light and shade, this was clearly Matthews Yard as we’d never quite seen or heard it before.One of the unexpected and wonderful outcomes of the closure of Fairfield Halls is the relocation of the London Mozart Players (LMP) to St John the Evangelist church, Upper Norwood. The longest-established chamber orchestra in the UK, formed in 1949 by conductor Harry Blech, LMP has been resident at Fairfield Halls since 1989. Executive director Julia Desbruslais described the move to St John the Evangelist as “a pivotal point in the long history of LMP”, making it ‘the first orchestra in this country to embed itself into the very heart of a living, breathing community’ with a vision “to build, connect and resonate with the people here”. Since the move in July 2016, LMP has done just that with a series of imaginative, interactive, inclusive concerts and projects with local schools, colleges, community choirs and intergenerational audiences.

It was absolutely fitting that the theme and title piece of the event was ‘Relationships’, as LMP launches a series of events which forge new relationships across the borough. The evening’s programme featured three pieces which each offered a unique reflection on relationships.

Photo by the London Mozart Players, used with permission.

Shostakovich’s Symphony for Chamber Orchestra was originally composed in only three days as String Quartet No 8. in 1960, when he had begun to experience symptoms of motor neurone disease and was contemplating suicide. In a letter to his friend Isaak Glickman, he wrote: “When I die, it’s hardly likely that someone will write a quartet dedicated to my memory. So I decided to write it to myself”. It was later intimated in his memoirs that the dedication in the score to ‘victims of fascism and the war’ was dictated by Soviet authorities and that the piece was really an epitaph. It opens with his musical signature, the DSCH motif, and references many of his other pieces and a Russian revolutionary song, ‘Tormented by Grievous Bondage’. The piece was transcribed for chamber orchestra by his friend, violist and conductor Rudolf Barshai.

We travelled the vast emotional landscapes of despair and destruction

LMP’s powerful rendering of this profound work took the listener into reflection on the deepest, darkest spaces of humanity. Artwork from students at Coulsdon College poignantly pointed to the relationship between the inner battles of the psyche and outward conflicts and war. With the mastery of expert voyagers, LMP guided us through the vast emotional landscapes of the individual and collective struggle with despair and destruction.

Hauntingly long notes were sustained against the furious thrumming of their bows, suggested the beating of a human being against the walls of their own pain and the walls of oppression. Music critic Erik Smith said that Shostokovich wept on hearing the “beautiful realisation of his most personal feelings” when the Borodin Quartet performed the piece to him at his Moscow home. I’m sure he would have been as moved as we were that night.

Fiona Brice, composer of the evening’s title piece, reflected on the relationship between the composer and orchestra in her contemplative introduction to the evening’s programme. She described the role of the composer as transcribing emotions into a form which can then be expressed by the orchestra. The relationship between her and LMP was one of trust, she affirmed, before they embarked on the world premiere of her piece, ‘Relationships’, which was written after a relationship break-up. LMP adeptly articulated the full spectrum of feelings in the piece, from tender moments of loss to sudden upward surges of positivity.

As Fiona said, these feelings are not limited only to relationship break-up but to the human condition. An orchestrator for artists including Placebo, Sandy Dillon and Kate Nash and violinist who has performed with Kanye West, Beyonce and Jay-Z, her headlining of this programme demonstrates the LMP’s intention to underline the vibrant relevancy of classical music in today’s world.

The final piece of the evening drew us into yet another layer of relationships – that between composer and composer. Ástor Piazzolla’s The Four Seasons of Buenos Aires, based on Vivaldi’s Four Seasons, is an intoxicating dance between an Argentinian composer writing in 1969 and an Italian composer writing in 1721.  Originally written for Piazzolla’s first Quinteto of violin, piano, electric guitar, double bass and bandoneon, the pieces were arranged for solo violin and strings by Leonid Desyatnikov. The fireworks of Piazolla’s Tango Nuevo caused real-life furore amongst classical musical traditionalists – fights broke out at performances of his works and he received death threats.

These players exploded the stiff, starchy stereotypes of the traditional orchestra

Fortunately, the audience at Matthews Yard was far more appreciative! We were drawn into a time travel tango where bursts of Vivaldi rang out amidst the fury, passion, heat and amore of Buenos Aires tango. LMP leader and soloist Ruth Rogers led us deftly through this vivacious, vibrant encounter with her flamboyant, expressive performance.

The dynamic relationship between LMP’s players is a compelling dance to witness. Their passion and commitment to playing right in the thick of things explodes the stiff, starchy stereotypical images of a classical orchestra. Julia Desbruslais’s affirmation that they “absolutely love playing together” is evident in every note.  Their elaborate musical conversation bounces from bow to bow playfully, delicately, precisely, furiously. We were all on our feet cheering at the end of this magical performance which connected players, composers, listeners and the wider community in promising new relationships.

#LMPOntheMove now goes on creating new relationships across the borough at events including the sound track to Charlie Chaplin’s ‘The Gold Rush’ at RoofTop Cinema, (to be reviewed in the Citizen shortly) and an expansive future programme. For more information, click here. 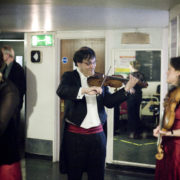 The London Mozart Players is deeply shocked and saddened by the sudden death of David Angel, our beloved colleague and friend, co-principal 2nd violinist with the LMP for the past 22 years.

He will be remembered for his enthusiasm, energy, musical integrity, consummate musical knowledge, all mixed up with a wonderful sense of humour that could lift any situation. All who came into contact with David were touched by his gentleness, generosity and humility as a human being. He is a massive loss to the world of classical music and 100% irreplaceable as a musician and personality within the LMP.

He will be sadly missed, and our thoughts are with his family at this difficult time. David’s family have asked for donations in lieu of flowers to the Alzheimer’s Society.

David Angel was a founder pupil of the Yehudi Menuhin School, where he studied with Yehudi Menuhin, Frederick Grinke, Jacqueline Salomons and Nadia Boulanger. In 1971 he won an Associated Board Scholarship to the Royal Academy of Music, continuing his studies with Frederick Grinke and receiving chamber music coaching from Sidney Griller, winning prizes for both solo and chamber music. He was a co-founder of the Maggini Quartet in 1988.

David’s solo playing received great acclaim, winning high praise in The Times for performances of Bach’s Chaconne and E major Concerto with the London Contemporary Dance, and in the Financial Times in 1988 for a performance at the Almeida Festival. He played Autumn from Vivaldi’s Four Seasons on many occasions, notably at the Barbican with the London Mozart Players, and was a soloist with London Musici.

David was an ARAM and in demand as a teacher and chamber music coach; in autumn 1993 he was appointed Professor of quartet playing at Birmingham Conservatoire, and he was also an Honorary Fellow of Canterbury Christ Church University College and Brunel University. 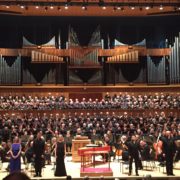 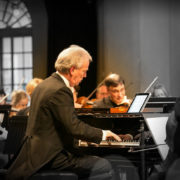 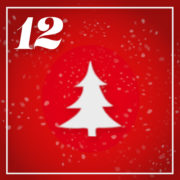 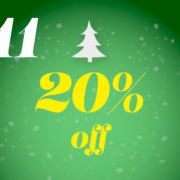 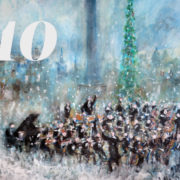 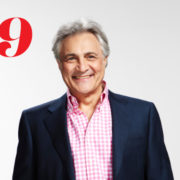 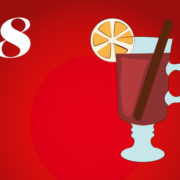 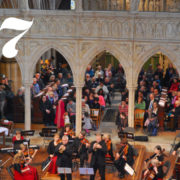 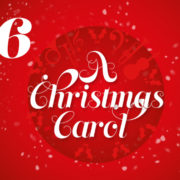 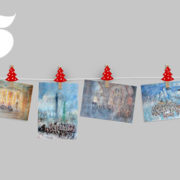 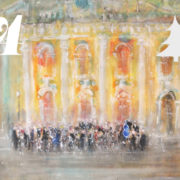 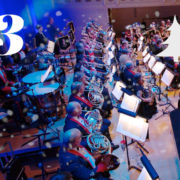 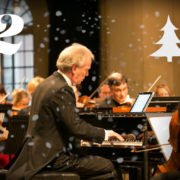 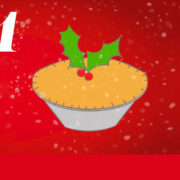