You are here: Home / A Classical Celebration! Concert Info and Programme Notes

Filmed at St John the Evangelist, Upper Norwood on 11 September 2020

The Classical Symphony was first sketched in 1916 but was mostly written during the summer of 1917, while Prokofiev was on holiday in the country. In his diary he wrote: “…I walked through the fields, composing the ‘Classical’ Symphony. I wrote down what I had already composed, but not yet in the form of a score.” In part the Symphony was written as an exercise in composition away from the keyboard. The 26-year-old composer was already well established as a “modernist” with numerous aurally challenging operas and piano works to his credit, so the accessible language of the Symphony may have come as a surprise to contemporary audiences, though it might also be seen as a look forward to the simpler, more melodic style Prokofiev would come to adopt a decade or so later. It can also be seen as one of the first works of neoclassicism, predating Stravinsky’s Pulcinella by about two years.

Prokofiev may have been deliberately constraining himself to write in a “classical” style, but he does so with obvious affection. There is more than a touch of Haydn-like humour in the sudden changes of harmony, dynamic and texture which pepper the work. Prokofiev himself was in no doubt that he had captured the essence of the style. In the same diary entry he continued: “When our classically inclined musicians and professors hear this symphony, they will be bound to scream in protest at this new example of Prokofiev’s insolence, look how he will not let Mozart lie quiet in his grave but must come prodding at him with his grubby hands, contaminating the pure classical pearls with horrible Prokofievish dissonances. But my true friends will see that the style of my symphony is precisely Mozartian classicism and will value it accordingly.”

Prokofiev himself conducted the premiere of the symphony in Petrograd, with the Russian State Orchestra, on 18 April 1918.

In 1850 Schumann and his wife Clara moved to Dusseldorf, where he had been appointed Municipal Music Director. The warmth of his initial welcome to the city clearly spurred his creativity: in just fourteen days in October he produced his Cello Concerto, followed shortly after by his Third Symphony (the Rhenish), which itself took only five weeks. Schumann initially had high hopes of securing a performance of the new concerto, but though he ran it through with the principal cellist of the Dusseldorf orchestra no performance followed – perhaps because his ineptitude as a conductor quickly soured his relationships with the Dusseldorf players. A later attempt to interest Frankfurt cellist Robert Bockmuhl also came to nothing, and by then Schumann’s deteriorating mental state was causing serious concern. He succeeded in making some final revisions to the work only days before attempting suicide and subsequently voluntarily entering a sanatorium. The concerto was eventually premiered in Leipzig by Ludwig Ebert and the Gewandhaus Orchestra in June 1860, four years after the composer’s death.

Schumann famously said to Clara, “I cannot write a concerto for the virtuosos, I must try for something else,” and it is true that the Cello Concerto’s undoubted technical challenges are not those which might allow a player to show off – which was one of Bockmuhl’s complaints. On the other hand, few other concertos reveal more of the nobly singing soul of the instrument. Schumann’s light orchestral scoring removes any potential problems of balance, allowing a seemingly endless flow of melody from the soloist and (in the brief second movement) the chance of a tender duet with the principal orchestral cello. Although the work is nominally in three movements, they run without a break, and motifs from the opening movement run throughout the work, binding it into an organic whole. 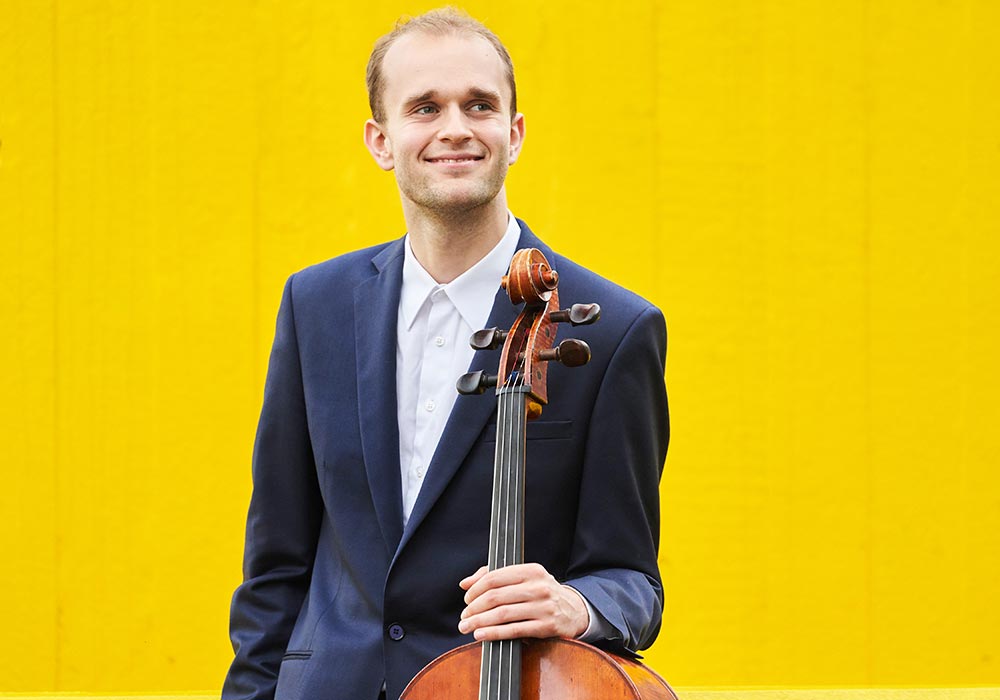 In 2015 at the age of 19, Maciej won First Prize and a special award at the Lutoslawski International Cello Competition and in 2016 he received a scholarship and special prize from the Deutsche Stiftung Musikleben at the Deutscher Musikwettbewerb. He was a Laureate in the Finals of the 2017 Queen Elisabeth Competition in Brussels and a prize winner at the 2019 YCAT International Auditions in London.

Born in Gdansk, Maciej studies with Wolfgang Emanuel Schmidt at the Kronberg Academy, and previously studied with Marcin Zdunik at the Stanislaw Moniuszko Academy of Music in Gdańsk, Mannheim University and the Franz Liszt University of Music in Weimar. He has taken part in masterclasses with Sir Andras Schiff and Mischa Maisky among many other virtuosi.

In addition to performing the Schumann Concerto with the London Mozart Players, this season Maciej returns to the Wigmore Hall as soloist, and as part of the Thomas Larcher Focus Day. He takes part in the Cello Biennale in Amsterdam, the Emanacje Music Festival in Lusławice, and records for Delphian. Other solo appearances include the Sinfonietta Cracovia at the Penderecki Festival, the Polish Philharmonic Orchestra ‘Sinfonia Baltica’, Siberian State Symphony and the Poznań Philharmonic Orchestras. Recitals and chamber music have taken Maciej across Europe and further afield, highlights including the Piatigorsky Cello Festival in Los Angeles, Beijing Super Cello Festival, the Penderecki, Lutoslawski, and Munich Rising Stars Festivals.

Solo highlights include the National Philharmony Warsaw, Baltic Philharmony, St. Petersburg Symphony, Calgary Symphony and Aukso: Chamber Orchestra of Tychy, among many others. He has also premiered a new work especially written for him by Tadeusz Kassak with the Kassak Brass Ensemble and undertaken a residency at the Ozawa International Academy in Switzerland. As a member of the Wilkormirski Trio, he has given concerts throughout Poland and recorded music by Arensky for the DUX label.

Ready to watch? Click here to go to the concert page.